END_OF_DOCUMENT_TOKEN_TO_BE_REPLACED

The key to eating right in the first place is the same key to eating right after you finish an HCG diet series. I center my food choices around healthy protein and fat, with very little carb. This is what the research on obesity shows to be the best way to stop the process of storing fat. I’ll have to review that topic at another time, because so many people are deathly afraid of fat. Are you one of them?

Of course, let me say once again that the low-fat craze is the worst diet plague ever inflicted on humankind. The whole concept of low-fat anything is such dogma that doctors, nutritionists, and many others who ought to know better continue to repeat it mindlessly. It is just plain ridiculous.

Best Way to Start the Day 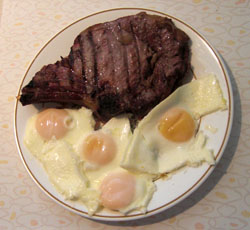 Here is my favorite breakfast. Yes, you are seeing straight. That is a real nice rib-eye steak, accompanied by four eggs (fried in butter!). There is absolutely nothing wrong with this meal, and everything right with it. It has no effect on my cholesterol level, the amount of fat that I store in my body, or anything else that is supposed to be harmful. And it is delicious! (Lots of garlic on it, too.)

The [TAG-TEC]HCG weight loss diet[/TAG-TEC] would be completely unnecessary, and the [TAG-TEC]obesity epidemic[/TAG-TEC] would not exist, if more people ate more food like my favorite breakfast. Hey, I know the science behind these claims. The research goes back almost 200 years, and the truth of what I am saying here is crystal clear.

I hope this shakes you up enough to dig into the research yourself. You are going to be shocked when you get to the bottom of modern dietary mythologies and see how you’ve been misinformed for so long.

Eat steak! Eat all the eggs you want! Drown your food in real butter! It is all good.

Whew! Thanks for enjoying my semi-rant. There is a lot more where that came from. What fun!

Dr. Simeons’ HCG+Diet Protocol takes the struggle out of weight loss for reducing fat and reshaping the body. It has been the most successful weight/fat management program for more than 50 years.

The [TAG-TEC]HCG diet[/TAG-TEC] specifically uses calories from fat as opposed to muscle. The outward evidence is body reshaping and skin tightening.

If your cholesterol is high or already starting to get stuck in arterial plaque, then plaque will break up and cholesterol will return to a normal and healthy range.

Whether your hormone output is too high or too little, this method of dieting will help normalize the output.

While HCG is not FDA approved for weight loss, it is entirely legal for a doctor to prescribe it.

The newly available oral form is convenient and painless. Furthermore, if injected, HCG requires a small needle that is relatively painless.

Weight lost during the diet is generally fast and steady, averaging between 0.5 to 1.5 pounds per day..

Energy is taken from the fat and not the muscle. This is easily measured by a reduction in body fat percentage during the protocol.

The [TAG-TEC]HCG diet side effects[/TAG-TEC] can include an increase in the production of natural sexual hormones in both males and females. Some people have experienced back aches but rarely do any side effects show up.

Not only will the HCG diet help normalize your appetite toward healthful foods, it will also help to maintain this appetite long after you are off the diet.

HCG directs your thyroid gland to return to normal and helps to rebuild your adrenal glands.

Just thought this list might be helpful as a nice summary of key benefits from Dr. Simeons’ 1954 book.

This topic may surprise you. Watch the video, which I posted on YouTube. Then read the full article below that.

Now for Some More Details

This is a 21st century update on what Dr. Simeons said about the HCG diet in 1954. The first item of importance is that cholesterol that is in circulation or in cell membranes where it belongs is important for good health.

Your body normally makes all the cholesterol that it needs and no more. However, when arterial walls become damaged, various components in the blood can get trapped in the damaged areas. Inflammation is the cause of this trapping effect, not high cholesterol. Dr. Simeons incorrectly blamed cholesterol for being the cause of arterial damage.

When enough material (cholesterol, calcium, fibrin, etc.) builds up into a plaque, arteries become clogged. The excess calcium even leads to hardening of the arterial wall. Although modern medicine blames cholesterol on this clogging, that is far from the truth.

Indeed, clinical evidence is very clear that plaque is best eliminated by chelation therapy that removes calcium or by systemic enzymes that remove fibrin. Modern medicine has wrongly targeted cholesterol as the problem, even though it is just a bit player in a complicated mixture of many substances.

Putting Cholesterol on the Move Again with HCG

One of the consequences of high HCG production in pregnant women was long ago observed to be higher levels of free cholesterol in circulation. Free cholesterol, as opposed to bound LDL cholesterol, has much less chance of being trapped into plaque.

Even the miniscule doses of HCG that are administered for weight loss have the effect of increasing the proportion of free cholesterol. This just means that trapped cholesterol has a tendency to be loosened and reintroduced into circulation. This is a good thing.

The first thing that happens is that blood cholesterol levels shoot up. Depending on how much plaque has accumulated, this number can seem to be frighteningly high. Blood cholesterol spikes are highest in those who already have high levels of cholesterol or who have already been diagnosed with arterial hardening and blockage.

The effect over time of releasing trapped cholesterol into free form is a decrease in arterial blockages and a consequently freer circulation. The clinical indicator of this effect is lower blood pressure.

One Caution About Trapped Cholesterol

When plaque gets out of hand and leads to nearly complete arterial blockage, it has more than likely gone too far to benefit from the effects of HCG. Cholesterol-lowering drugs would also have very little effect on thick, calcium-filled plaque. (These drugs, in fact, only inhibit the synthesis of new cholesterol.) Other treatment modalities such as chelation therapy and systemic enzyme therapy would be more appropriate starting points.