Dr. A.T.W. Simeons commented on the cholesterol-lowering effects of his hCG weight loss protocol in the 1971 revision of his book, Pounds and Inches. Updated experimental research in 2011 confirmed and expanded on his observation. The good news is that the health benefits of his protocol are even better than previously thought. Here is why.

The quote from his book here describes Dr. Simeons’ observation on the effects of his diet protocol on cholesterol. Bolded and bracketed text explains a couple of the terms.

The exact extent to which the blood cholesterol is involved in hardening of the arteries, high blood pressure and coronary disease is not as yet known, but it is now widely admitted that the blood cholesterol level is governed by diencephalic [brain] mechanisms. The behavior of circulating cholesterol is therefore of particular interest during the treatment of obesity with HCG. Cholesterol circulates in two forms, which we call free and esterified [bound]. Normally these fractions are present in a proportion of about 25% free to 75% esterified cholesterol, and it is the latter fraction which damages the walls of the arteries. In pregnancy this proportion is reversed and it may he taken for granted that arteriosclerosis never gets worse during pregnancy for this very reason. To my knowledge, the only other condition in which the proportion of free to esterified cholesterol is reversed is during the treatment of obesity with HCG + diet, when exactly the same phenomenon takes place. This seems an important indication of how closely a patient under HCG treatment resembles a pregnant woman in diencephalic behavior.

When the total amount of circulating cholesterol is normal before treatment, this absolute amount is neither significantly increased nor decreased. But when an obese patient with an abnormally high cholesterol and already showing signs of arteriosclerosis is treated with HCG, his blood pressure drops and his coronary circulation seems to improve, and yet his total blood cholesterol may soar to heights never before reached. At first this greatly alarmed us. But then we saw that the patients came to no harm even if treatment was continued and we found in follow-up examinations undertaken some months after treatment that the cholesterol was much better than it had been before treatment. As the increase is mostly in the form of the not dangerous free cholesterol, we gradually came to welcome the phenomenon. Today we believe that the rise is entirely due to the liberation of recent cholesterol deposits that have not yet undergone calcification in the arterial wall and therefore highly beneficial.

The key points in the above quote are:

Note that the following two statements in this quote, taken together, are a bit of a puzzle:

The exact extent to which the blood cholesterol is involved in hardening of the arteries, high blood pressure and coronary disease is not as yet known…

…it is the latter fraction which damages the walls of the arteries.

In reality, cholesterol has NEVER been shown to initiate damage to the walls of arteries. We know very well that the involvement of cholesterol in hardening (i.e., calcification) of the arteries, high blood pressure and coronary disease is an effect of damage, not a cause.

Know This About Cholesterol

Unfortunately, such reality has not stopped the runaway train of the anti-cholesterol medical establishment. Rather than revisiting that topic here, I will just refer you to my most recent article on the subject, on my HerbScientist.com blog here: FDA Ramps Up the Great Cholesterol Con.

Actually, we know very well what the relationship is between cholesterol and cardiovascluar disease. However, since cholesterol does not cause disease, lowering its levels might be interpreted as irrelevant.

Nothing could be further from the truth. It turns out that the real relationship between cholesterol and cardiovascular disease shows us why lowering cholesterol levels is much better news than you might think.

I will explain why that is the case later. First, let’s take a look at Dr. Simeons’ original observation about the cholesterol-lowering effects of his diet through the lens of the latest research.

Research Update on the hCG Protocol

The latest study evaluating the protocol in any depth, with reference and abstract, is:

Being overweight or obese is associated with an increased risk for the development of non-insulin-dependent diabetes mellitus, hypertension, and cardiovascular disease. Dyslipidemia of obesity is characterized by elevated fasting triglycerides and decreased high-density lipoprotein-cholesterol concentrations. Endothelial damage and dysfunction is considered to be a major underlying mechanism for the elevated cardiovascular risk associated with increased adiposity. Alterations in endothelial cells and stem/endothelial progenitor cell function associated with overweight and obesity predispose to atherosclerosis and thrombosis. In our study, we analyzed the effect of a low calorie diet in combination with oral supplementation by vitamins, minerals, probiotics and human chorionic gonadotropin (hCG, 125-180 IUs) on the body composition, lipid profile and CD34-positive cells in circulation. During this dieting program, the following parameters were assessed weekly for all participants: fat free mass, body fat, BMI, extracellular/intracellular water, total body water and basal metabolic rate. For part of participants blood chemistry parameters and circulating CD34-positive cells were determined before and after dieting. The data indicated that the treatments not only reduced body fat mass and total mass but also improved the lipid profile. The changes in body composition correlated with the level of lipoproteins responsible for the increased cardiovascular risk factors. These changes in body composition and lipid profile parameters coincided with the improvement of circulatory progenitor cell numbers. As the result of our study, we concluded that the improvement of body composition affects the number of stem/progenitor cells in circulation.

This study provides some excellent data, which we will explore shortly. It also offers unwarranted conclusions about cause and effect that represent obsolete dogma about the role of cholesterol in causing cardiovascular disease. We will ignore that for now.

Here are the relevant data of interest:

This graph shows the distribution of 53 subjects for post- to pre-diet ratios of total mass and of fat mass. It shows that most of the subjects decreased both. 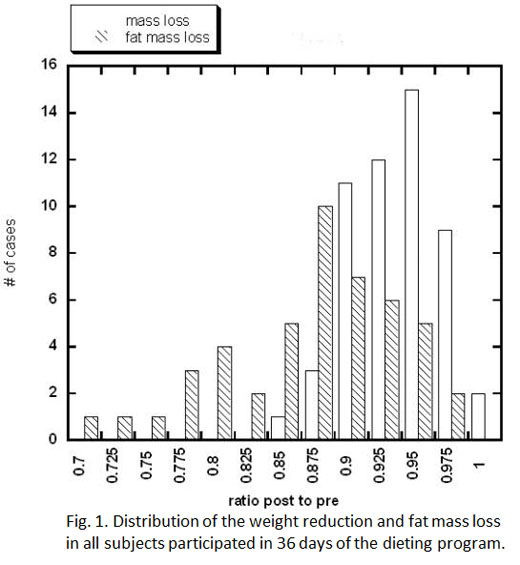 Note that the one type of cholesterol that is truly problematic, although still not causal for cardiovascular disease, is a category called “small density LDL” (sdLDL). Most medical folks are not paying attention to it yet. The study reviewed here did not evaluate it. I predict that it will become more important in the public consciousness as time goes on … as soon as health insurance companies start covering the fee to test for it.

For now, the key results from the hCG protocol are the significant drop in total and LDL cholesterol levels, as shown below. 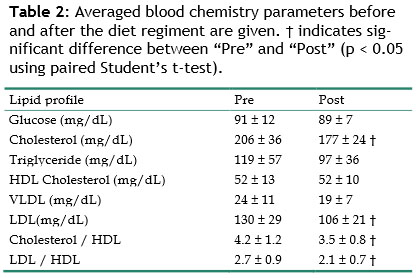 The measure of most importance regarding arterial health in this study is the number of circulating CD34-positive cells.

From the article (my bolded text):

In addition to established cardiovascular risk factors, systemic inflammation, increased oxidative stress, and altered hemodynamics associated with excess weight may directly contribute to endothelial [arterial wall] injury and dysfunction. Progenitor cells, which are released from the bone marrow are sensitive to oxidative stress. Circulating endothelial progenitor cell (EPC) numbers have been found to be lower in obese subjects compared to overweight or normal weight adults, and the colony-forming capacity of these cells is blunted. Alterations in endothelial cells and EPC function associated with obesity precede atherosclerosis and thrombosis. Moreover, EPCs expanded from the obese subjects possessed reduced adhesive, migratory, and angiogenic capacity and fail to respond to vascular endothelial growth factor.

Evaluating circulating CD-positive cells provides a window into how well those EPCs are working to lay down healthy artery walls. Basically, the more the better. This what the study found: 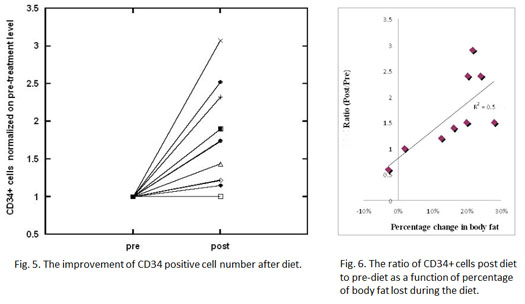 You can expect that an increase in circulating CD34-positive cells is of great benefit for the health of arterial walls.

These data are the best blood-test indicators for cardiovascular health in this study.

Key Points of the Study

As a result of the hCG diet protocol, subjects in the study showed:

And the Real Meaning is…

The question is, since cholesterol does not cause cardiovascular disease, why is lowering it still important in this study?

Consider that cholesterol plays a crucial role in many aspects of our metabolism. In regard to cardiovascular disease, it acts as a healing agent in response to arterial damage by inflammation. In other words, a rise in cholesterol, specifically LDL, is a response to damage that is already occurring.

This quote by experienced neurosurgeon, Dr. Jack Kruse, sums up that particular role of LDL cholesterol, in this article:

The cell responds to all stress by increasing cholesterol production. If you go into an ICU with a patient with an acute infection and draw their lipids (not often done except by a tool like me) you will find sky high LDL cholesterol. And that is both LDL and HDL, but the LDL fraction is much higher. Higher LDL cholesterol stabilizes the inner mitochondrial membrane function during heavy oxidative phosphorylation (cellular energy production). And since the cell is trying to recover from a stress it needs a good inner mitochondrial membrane in which to transfer its electrons to make ATP. That is the reason why this occurs.

And from this article:

So anytime the body is stressed or inflamed for any reason, both good and bad, it up-regulates LDL cholesterol production to make more lifesaving hormones.

How Does Cardiovascular Disease Get Started?

A few years ago I met Dr. Dwight Lundell, who had performed about 5,000 open heart surgeries in his career as a surgeon. He discoveed that the only thing that all of his patients had in common was inflammation inside their arteries. Not cholesterol. Not calcification. Not blockage.

If it seems as though I have beaten this notion to death, let me say one more thing:

How Can Cardiovascular Disease Be Cured?

Now for the Good News About Cholesterol

When your cholesterol levels go up, especially LDL, it means that your body is providing a healing response to inflammation. If you have acute (sudden, short-term) inflammatory damage, then cholesterol will help get it fixed.

On the other hand, if you have chronic inflammatory damage, you will have chronically high levels of LDL. Eventually, some if it (sdLDL) will get stuck in an arterial ‘pothole’. It will accumulate and it will attract deposits of other things that should also stay in circulation, such as calcium. Then you will see arterial blockage and hardening of the artery walls. Worst of all, the sdLDL will oxidize and act like a little flamethrower, burning up endothelial tissue and making a bad situation worse.

The bottom line is that short-term elevated levels of LDL are crucial for good health. Unfortunately, they become long-term problems if inflammation is not treated and reduced.

Ultimately, one of beneficial side effects of losing weight and fat on the hCG diet protocol is reducing inflammation. This explains why the cholesterol-lowering effects of the protocol are important. Once the inflammation begins to subside, the need for LDL drops. So it drops naturally.

In fact, when you think about it, lowering cholesterol with statins or other drugs undermines the potential for cholesterol to respond to inflammation. There simply isn’t enough cholesterol when you really need it.

Lowering cholesterol levels by reducing inflammation in the first place, as with the hCG diet protocol, seems much more sensible, don’t you think?

This is a good thing.