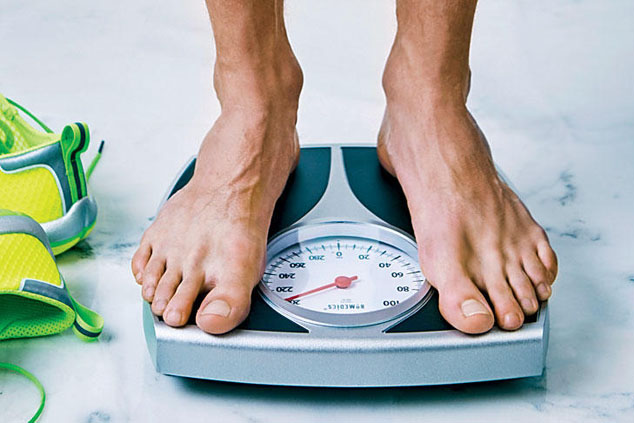 About 7 years ago my weight reached an unacceptable high point – 210 lbs, or about 30 lbs over what I thought I should be. Although panic didn’t set in, I had a hard time believing that I was that fat guy looking back at me in the mirror. What happened to that formerly svelte athlete that I still imagined myself to be?

That is when my ‘teacher’ appeared … i.e., a friend who had become noticeably slimmer in a very short time. Once he explained his success using the hCG protocol, I was off to the races. The 30-day protocol helped me shed those 30 lbs and drop about 4-5% body fat. Hallelujah! Or so I thought.

Over the subsequent years I never reached 200 lbs again, although I hit the mid-190s off and on. More recently, after adopting a VLC (very low carb) and mostly paleo diet, I still vacillated between 185-190 lbs. Not disastrous, but still not really acceptable. The little 5-10 lb belly that I acquired in my ‘expansion’ years just would not go away.

I’ve spent the greater part of 2015 hunting down reasons why I keep my little abdominal blob and how to get rid of it. Gazillions of self-proclaimed experts have advice on how to do so. At least 99.99% of them are dead wrong. The public has no chance of sorting out truth from what is mostly fiction. Even reputable scientists have stepped in with advice. Unfortunately, 99.99% of their research is also off track.

Weight Loss – Not What You Think

Metabolic redirection, which includes maintaining healthy weight and body fat composition, is more about how hormones direct the acquisition and use of energy throughout your body.

Here is a truth bomb about what that really means: Metabolic redirection has a lot less to do with diet and exercise than most people realize.

Instead it has a lot more to do with redox potential, energy flow of electrons and photons, the state of the battery-like charge of your mitochondria, oxygenation, hydration, and the structure of cellular water. If you are wondering where calories come into this equation – they don’t. Calories are the most ridiculous and irrelevant concept ever, in regard to actual metabolism.

If you are curious about why I say that, take a look at my short ebook on this topic, which you can download at no charge here: Calorie Counting Madness: Surprising Truths About Weight Loss. If you happen to be a big spender, you can pay for the Kindle version on Amazon (99 cents!).

You can, indeed, ruin your health with a poor diet. Most people do. Just as many do damage by poor exercise, too. Both of those are extensive topics that I will explore in detail later. Meanwhile, truly redirecting your metabolism entails subjects that I have written about on my HerbScientist.com blog. For example:

Heliophobia Makes Modern Disease for One and All

Those are just a start. Please take your time to grasp what I am saying in those articles.

The master hormone is leptin, about which much has been written since its discovery in 1994. It is the master of many other hormones. Leptin also operates via a signaling pathway that involves the hypothalamus, like what hCG does during the Simeons protocol.

All other key hormones for metabolic redirection fall into line once these two are fully functional – i.e., without resistance.

This is where my thinking began when I wanted to solve my extra belly fat problem. I figured that I could make some progress toward getting rid of it with a quick run through the hCG protocol with the addition of cold thermogenesis (CT). One of the articles linked above explains the power of CT to redirect metabolism all by itself. I wanted to run my self-experiment to see how it would work while doing the hCG protocol.

What I found is that I could drop my 10 extra pounds in less than a month AND lower my body fat composition by about 2.5%. My results are plotted out in this graph so you can see at a glance how it went. 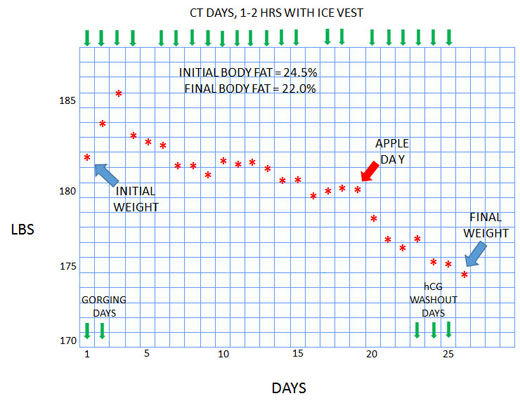 Some explanation is required. Notice that I hit a plateau for nearly two weeks. I took my own advice to others whom I’ve guided through the protocol and had an apple day to get off the plateau … just 5 apples all day, with very little liquid intake. That did the trick.

One thing to note is that during this experiment I continued my twice-weekly pattern of intermittent fasting, usually on Sundays and Thursdays. This is crucial for many reasons (see link to article above), not just for weight and fat management.

Here is one thing that such an N=1 (i.e., me) experiment won’t tell me: what did the combination of CT and the hCG protocol actually do? Did one or both variables have an impact, or neither? This is where a controlled experiment would help, although having just one subject prohibits that approach.

What do I think happened? Since I had been doing CT for a few months beforehand, the hCG protocol clearly got me off the dime to shed 10 lbs. In addition, my waist shrunk. Belly fat got smaller. Body fat went down.

In the aftermath, after the 21-day maintenance period (i.e., VLC) called for by Dr. Simeons, my weight stabilized at around 180 lbs and my body fat around 22%.

It appears that my hCG reset has been established and that any leptin resistance that I might have been experiencing has also equilibrated.

Just for fun, after my experiment, my weekly mastermind group decided to conduct a group fat-fasting experiment. Fat-fasting is a 5-day protocol that I first discovered in Dr. Robert Atkins’ book, The New Diet Revolution. Its purpose it to help folks get going during the 2-week induction phase (20 grams carbs max per day) when they are stuck on a weight loss plateau. It can work wonders. (I explain it in more detail in my Fat Loss Biology ebook.)

During the 5 days of fat-fasting, I once again dropped down about 5 lbs and another 1% body fat. I now hover in the high 170s and around 21% body fat.

How about my little tire around the middle? It is certainly smaller. My pants fit looser. I have to go down a notch on my belt on most days.

It isn’t gone, though. I know that the promise of washboard abs isn’t realistic, since that takes ultra-low body fat (below 10%).

Nevertheless, my continued research into metabolic redirection has provided new avenues for making lifestyle changes. More UV light during the day, less blue light at night, better sleep, more DHA from whole foods (i.e., oily fish), efficient non-damaging workouts (e.g., Best Resistance Exercise for Seniors and Achieving Fitness in Less Time). Oh, and getting more of the free antioxidants from Mother Earth, and defending myself against non-native electromagnetic fields in my own home.

I’ve yet to discover all of the possible metabolic redirection bonuses out there. I will keep looking. I hope you enjoy and benefit from what I find out.