Normal weight fluctuations on the HCG weight loss diet often happen in spite of rigorous adherence to the protocol. Just when you think you have done everything right, weight loss stops or you experience weight gain. Here is what you should know when this happens to you. 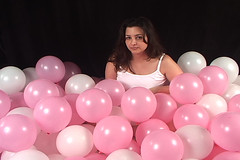 In his 1954 book, Pounds and Inches, Dr. Simeons explains weight fluctuations on the HCG protocol as follows (I’ll put this into better English for you below):

After the fourth or fifth day of dieting the daily loss of weight begins to decrease to one pound or somewhat less per dlay, and there is a smaller urinary output. Men often continue to lose regularly at that rate, but women are more irregular in spite of faultless dieting. There may be no drop at all for two or three days and then a sudden loss which reestablishes the normal average. These fluctuations are entirely due to variations in the retention and elimination of water, which are more marked in women than in men.

The weight registered by the scale is determined by two processes not necessarily synchronized under the influence of HCG. Fat is being extracted from the cells, in which it is stored in the fatty tissue. When these cells are empty and therefore serve no purpose the body breaks down the cellular structure and absorbs it, but breaking up of useless cells, connective tissue, blood vessels, etc., may lag behind the process of fat-extraction. When this happens the body appears to replace some of the extracted fat with water which is retained for this purpose. As water is heavier than fat the scales may show no loss of weight, although sufficient fat has actually been consumed to make up for the deficit in the 500-Calorie diet. Then when such tissue is finally broken down, the water is liberated and there is a sudden flood of urine and a marked loss of weight. This simple interpretation of what is really an extremely complex mechanism is the one we give those patients who want to know why it is that on certain days they do not lose, though they have committed no dietary error.

Patients who have previously regularly used diuretics as a method of reducing lose fat during the first two or three weeks of treatment which shows in their measurements, but the scale may show little or no loss because they are replacing the normal water content of their body which has been dehydrated. Diuretics should never be used for reducing.

What Did He Say?

Fluid retention is the key point. Your body will retain fluid in place of fat that has been rapidly metabolized under the influence of HCG. This is normal, since the fluid acts only as a place-holder for the lost fat, until the structural tissue associated with fat can be broken down and eliminated.

The slow rate of this process may not show up in daily weight loss. Fat loss will, however, show up in smaller measurements around the waist and other areas. Not to worry. Fluid elimination catches up within a few days, which puts weight loss back on schedule.

One point about Dr. Simeons’ explanation that seems to be unfair is that women are more subject to these kinds of weight loss fluctuations than men. Women naturally have a higher body fat percentage than men, so wilder fluctuations are to be expected based on that fact alone. In addition, women often settle into a loss rate that is about half that of the loss rate of men. I suspect this has more to do with the comparative estrogen balance between women and men. Moreover, women who are premenopausal often retain fluid in a monthly pattern that can also add to weight loss fluctuations during the protocol.

All the best for your HCG weight loss diet,