The HCG diet apple day is the key to breaking through a weight loss plateau during the HCG diet protocol. You can almost expect to have at least one plateau, when weight loss simply stops for a few days. The sooner you have an apple day, the right way, the better your overall progress will be. 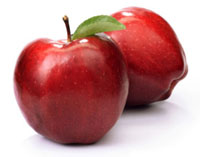 First of all, realize that Dr. Simeons discovered the importance of the apple day more than 50 years ago. Even though it is not new, many dieters seem to be unaware of its importance and how to use it properly.

An apple-day begins at lunch and continues until just before lunch of the following day. The patients are given six large apples and are told to eat one whenever they feel the desire though six apples is the maximum allowed. During an apple-day no other food or liquids except plain water are allowed and of water they may only drink just enough to quench an uncomfortable thirst if eating an apple still leaves them thirsty. Most patients feel no need for water and are quite happy with their six apples. Needless to say, an apple-day may never be given on the day on which there is no injection. The apple-day produces a gratifying loss of weight on the following day, chiefly due to the elimination of water. This water is not regained when the patients resume their normal 500-Calorie diet at lunch, and on the following days they continue to lose weight satisfactorily.

That is all there is to it!

1) Eat only apples for one whole day, starting at lunch, resuming the regular HCG diet at lunch the following day.
2) Limit the number to six large apples
3) No liquids except a minimal amount of plain water, just enough to quench an uncomfortable thirst

That part about not doing an apple day on a non-injection day just refers to Dr. Simeons’ original protocol whereby injections were given six days per week with one day off. This, of course, does not apply to the use of oral forms of HCG (i.e., sublingual liquid, sublingual pellets). It probably does apply, however, to women who suspend taking HCG during their menstrual cycle.

What An Apple Day Is And What It Is Not

I just want to reiterate that the HCG diet apple day is a strategy for overcoming a normal weight loss plateau.

The reason for emphasizing that point is that I am often asked whether the apple day can be used for getting back on track after a willful interruption of the protocol. Willful interruptions include going off of the HCG for one to a few days, having one or more days off of the restricted diet to eat or drink at a wedding, a holiday dinner, a party, you name it.

The answer, basically, is NO. That is not the purpose nor the main utility of the HCG diet apple day.

I know of plenty of folks who have used the apple day several times during the protocol, to justify frequent wild swings in their eating habits. This can be effective for some people. However, for the most part, if you are not serious about staying on the protocol as it is designed, then do not expect it to be as effective as it can be.

An apple day, as clearly stated by Dr. Simeons, is useful for getting off of a weight loss plateau while taking HCG. It is not a strategy for weight loss between rounds of HCG or for any other non-HCG period of dieting.

All the best with your HCG diet apple day,