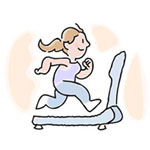 The topic of weight loss exercise during the hCG protocol has attracted a lot of hooey – misinformation, wild unsupported claims, crazy advice, and much more. The facts are that, just as with any other weight loss protocol, the benefits of exercise are highly variable among different people.

On one extreme, muscle-bound fitness gurus advocate intense exercise of the type that is typified by the popular P90x program. In the other extreme, testimonials in many blogs explain how successful people can be during the hCG protocol without doing any exercise at all. The optimum exercise for you or anyone else probably lies somewhere in between.

How about checking into using a Wii? Here is what Brian M. Connole suggested at HCG Diet 411 recently:

You’ll Have So Much Fun Doing This You Won’t Even Realize You’re Burning Calories!

Don’t yet have your own Wii? Don’t worry, you can find them at places like Target, Walmart, Best Buy or even right here on Amazon.com for really good deals and free shipping.

Having fun with weight loss exercise,